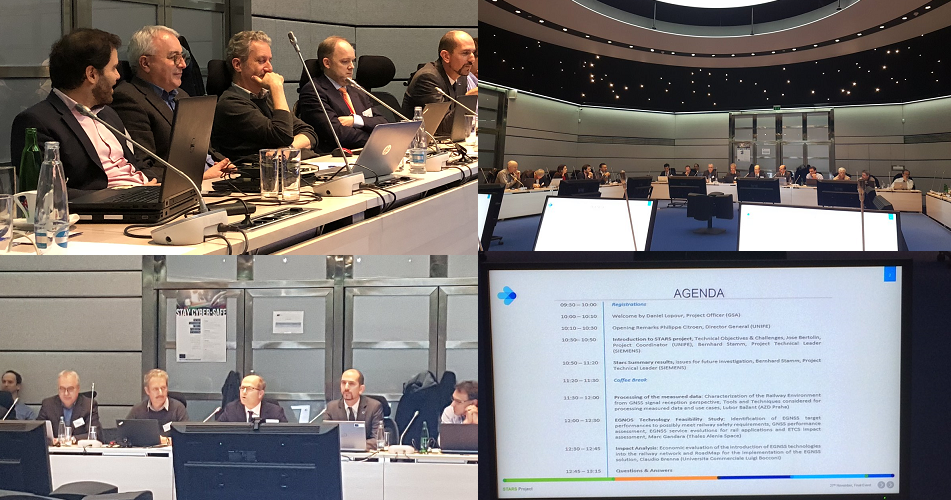 STARS Final Conference. was held on Tuesday, 27 November, in the premises of GSA. The event gathered 50 participants, including project consortium members and stakeholders from the rail industry, the aerospace sector and various research centres. The first session of the event includes the welcomes form Daniel Lopour (Project Officer) and Philippe Citroën (Director General of UNIFE), a general introduction of the project from Jose Bertolin (Project Coordinator) and an extensive summary of the main achievements, results and extended issues for future projects presented by Bernhard Stamm (Technical Leader).

The second session was dedicated to the work package which main activity has been developed during the second period of the project. A summary of the activities performed on the railway environment characterization from GNSS signal reception perspective, the EGNOS Technology Feasibility Study and the economic evaluation of the introduction of EGNSS technologies into the railway network were presented by the WPL and main partners involved in the activities.

During the Final Session of the Event apart from the presentation of the work packages which main activity was dedicated to the Measurement Campaign, Salvatore Sabina (X2Rail2 Project Coordinator) introduced how the outcomes of STARS will contribute to the activity of the IP2 within Shift2Rail programme and the continuation of the work in the topic of the satellite positioning into the railway sector.

STARS Final Conference finalized with a proactive and instructive dialogue between the participants and the consortium where the results, upcoming activities and potential benefits for end-users were discussed.

The presentations from the event are available below: